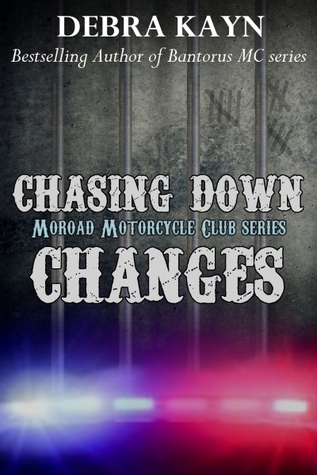 He is his father’s son.

After fifteen years in the Idaho State Penitentiary, Jeremy Aldridge walks out of prison with the knowledge and skills that made his dad a legend in the gang wars within the system and the driving force behind Moroad Motorcycle Club. Outside of the Cyclone fence, Jeremy reaches for the familiar…Lola, the lifers, his Harley.

But, the one woman he owns and expected to find waiting for him has pulled away from Moroad. He discovers Tiff running the biggest illegal business Federal has ever seen, and her time is up. She belongs to him, and he’ll risk everything to keep her.

Tiff’s mantra since losing Jeremy falls to the wayside when he walks into Silver Girls and claims she still belongs to him. At one time, Jeremy was her whole world despite her tendencies to test him at every turn with petty fights, temper tantrums, and jealousy.

The man who returned from prison no longer plays games. Bigger, stronger, smarter, scarier, Jeremy’s presence threatens her business, resurrects old insecurities, and has the ability to destroy her.

How to become President of the Moroad MC. Jeremy was the son of Cam, the current president of the notorious Moroads MC. The successor would have to prove he had what it took to lead this group of criminals. Evidently one of the criteria’s was to kill someone and Jeremy did just that on more than one occasion.

Jeremy had a tough life growing up with an addict mom and a dad that wasn’t in the picture. He had met Tiff in high school and she was the only thing that he wanted after she took that ride on his bike with him. Tiff and a tough life too and Jeremy was there for her helping her through everything that she had to deal with at home. She was bound and determined to go to college and make something of herself. Life has a way of throwing curve balls though and at the age of 20 Jeremy was sent to the state pen not for the 18 months that Tiff thought he would be gone but for 15 long years. Jeremy went from a boy to a strong, calculating man that did what it took to get him through those 15 years and to stake his claim as the next Moroad MC President. He made the Moroads an unbreakable force both in the pen and out. During his time in he never heard or seen Tiff and was told that she had moved on. Well, that just doesn’t happen in the mc life; once his property, always his property.

Tiff did move on after Jeremy was sent up to the Pen only because she thought that he had staked his claim on Lola and left her out in the cold. This meant that the MC did nothing to help Tiff out when Jeremy was in. Her heart was shattered. Jeremy was everything to Tiff and besides losing him to the Pen, she lost him to Lola. Of course on his release from the Pen Jeremy’s father, Cam made sure that when Tiff got to see Jeremy it was in his bedroom with Lola. If her heart could break anymore it would have. Cam thought that Tiff was wrong for Jeremy because he knew how important Tiff really was to Jeremy. While Jeremy was gone Tiff didn’t go to college as she had wanted instead she began not one but two businesses. She owned and ran Red Light which was a brothel and Silver Girls which was a strip joint both located in the same building. This place was policed by both the Moroads and the Bontorus MC which came together because both MC’s had women who worked here. Tiff worked hard to have this and wasn’t about to let anyone take this from her. Every time that Jeremy and Tiff started to trust one another again and find what they had before after all the lies that were told to keep them apart, Lola would come in to the picture. Jeremy made known that no matter what Lola would always be important to him. And he kept telling Tiff that no he was not “with” Lola, only with her.

This was the first time reading this author and I will definitely check out her other books now because this was a gritty, dirty, MC book which left you wanting for more. Was Jeremy able to hold on to Tiff and become the next President? A women in the MC life was to take orders and was considered property, would the now indepedent Tiff be able to handle that? And what hold did Lola have on Jeremy and would he be willing to give her up for Tiff? This is a book that will keep you up until 3 a.m. because it’s that damn good!

Bestselling Romance Author, Debra Kayn lives with her family at the foot of the Bitterroot Mountains in beautiful Northern Idaho. She enjoys riding motorcycles, playing tennis, fishing, photography, and creating chaos for the men in the garage.

When Debra was nineteen years old, a man kissed her without introducing himself. When they finally came up for air, the first words out of his mouth were…will you have my babies? Considering Debra’s weakness for a sexy, badass man, who is strong enough to survive her attitude, she said yes. A quick wedding at the House of Amour and four babies later, she’s living her own unbelievable romance book.