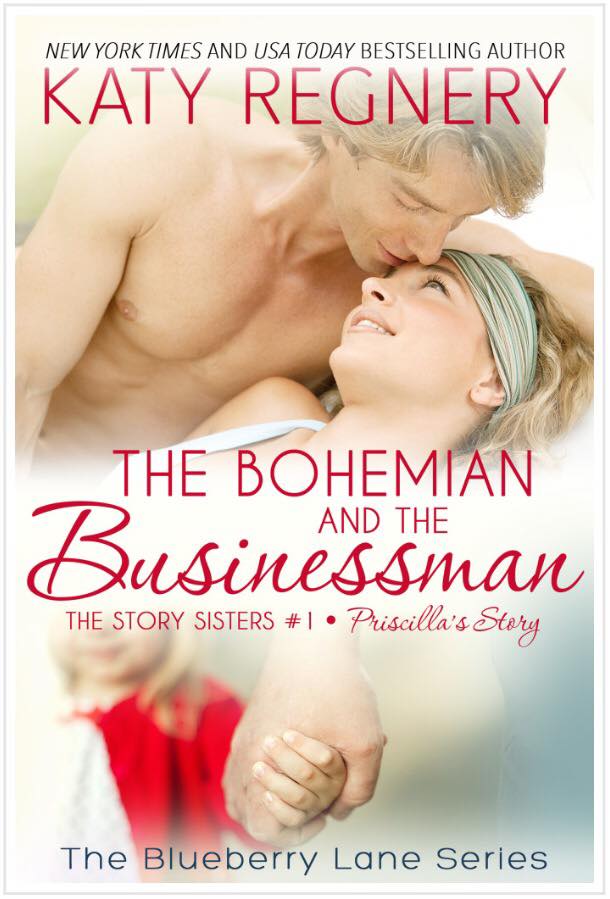 Katy Regnery is back on Blueberry Lane and the first standalone in the Story Sisters series is NOW LIVE on iBooks, Nook & Kobo!

The Bohemian and the Businessman will release on Amazon onto Kindle Unlimited on April 28th!

Throughout her entire Blueberry Lane series, Katy Regnery has continuously given us such amazing characters, ones who touch us and fill our hearts with immense satisfaction.  Well, not surprisingly, she has done it once again with her first novel focused on the Story sisters.  The Bohemian and the Businessman will run you through a gamut of emotions but as always, in the end, will leave you feeling such joy and contentment upon the turning of the final page.

Priscilla has always been very different from her sisters.  Growing up in a life of privilege, though her free spirit and preference for art over business had persistently kept her feeling like an outcast and the black sheep of the family which could sometimes leave her in a precarious situation.  This time there is no covering up her circumstance, and she is desperate to find a solution before her family finds out.  Shane’s upbringing was poor and far different from Priscilla’s.  Being raised on a farm and living a small life always worried whether his family would have enough money to put food on the table and keep the electricity running.  Determined as a young boy to make a better life for himself, he now works at Story Imports with aspirations of moving up the business ladder, no matter what it takes.  When both Priscilla and Shane are left with uncertainty as they perceive the horizon of their futures, they agree that a simple “marriage of convenience” may just be the answer to both of their problems.

But in hopes of proving to everyone that their relationship is genuine, Shane and Priscilla decide to spend more time together though it goes beyond their initial agreement.  As the hours and days pass, their connection to one another deepens, and they both begin to fall harder than they ever anticipated.  Despite the external differences exhibited by Shane and Priscilla, they soon realize that their souls are a perfect match in every way imaginable.  Will their deepening love for one another overshadow their individual differences allowing Shane and Priscilla to find their unity and happily-ever-after in each other’s arms?

I fell quickly and very hard for Shane and Priscilla.  Despite the diversities of their personalities, they truly are a union of souls.  Shane is the epitome of the word gentleman showing his deep concern and caring for Priscilla, as well as an inherent need to protect her, even before he truly acknowledges to himself the deep feelings he has.  Priscilla persistently exhibits such a deep kindness and gentle nature which emanates from her very core, despite her upbringing which, other than what she shares with her sister, Margaret, is completely devoid of an emotional and loving connection.  As these two souls meld together they begin to create a life together which fulfills the profoundly emotional and loving needs they have both been longing to find.

I’m beginning to think I should create a template for myself for writing a review of one of Katy Regnery’s novels.  With each and every story she pens, Ms. Regnery creates such fantastic and memorable characters that consistently leave my heart fluttering and my soul swooning with complete serenity and satisfaction.  And The Bohemian and the Businessman accomplished that once again.  I have read some comments that Shane and Priscilla have been added to a list of favorite Blueberry Lane characters but, quite honestly, for me it is like a mother choosing a favorite amongst her children.  There is absolutely no way to pick a favorite between all of the charming and wonderful souls which Ms. Regnery has given us throughout the Blueberry Lane series.  Each and every one of them has been so special and spectacular in their own ways.  And I simply love them all!!