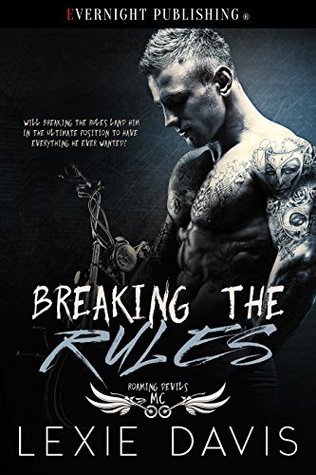 All Ryker Dennison wanted was to become President of the Roaming Devil’s Motorcycle Club. It would be his legacy. His grandfather and father had both held the title and he was the next in line.

Enter Ella Hawkins. He had known her since they were fifteen and had tried to push her memory away. Their troublesome past included her father arresting him, which was not something he could easily forget. But when she came to him, pleading for his help to save the one man he despised from a rival motorcycle gang, he found himself agreeing to help her, thus breaking the number one rule of the MC.

Ryker soon finds himself with a major dilemma. Women weren’t part of the club life and bringing Ella into his world would only mean putting her in danger. With his father trying to push Ella away from him for his own benefit, her father constantly trying to arrest him, and his own desire for her getting in the way of his club life, he finds himself going against everything to be with the woman he loved. Will breaking the rules land him in the ultimate position to have everything he ever wanted? Or will his risky move cost him everything, including the woman of his dreams?

This is a gritty biker read about the one percenters and it pulled me in and kept me captivated the whole time. The Roaming Devils position of club president had been in Ryker’s family since his grandfather and now his father, Razor, was acting president with Ryker being groomed to take over eventually. Unlike Razor who was a ruthless SOB, Ryker did have a heart under that cut he wore. When he was in high school there was a girl that he had been infatuated with and wanted nothing more than to treat her the way he felt she should be treated. It so happened that that girl’s father was a cop and was the cop who put Ryker in jail after being caught almost doing the dirty deed with Ella. So Ryker went to prison for drugs and Ella went to college and became a dr.

Ella came back home to do her residency and took up again with bad boy, Ryker. They had a lot to go through to be together because both Razor and Ella’s cop dad did not want these two to get together for the same reason almost…Ryker needed to keep his head on straight in order to take over the president position in the club and women were only good for one thing and Ella’s dad knew that the Roaming Devils were some of the baddest bikers out there and he didn’t want his daughter pulled into that life. The only problem with this was that Ryker and Ella had really loved each other since high school and none of that changed the whole time they were apart. Ryker thought that he would be able to keep up with everything expected of him from the club and Ella just wanted to be there for Ryker because she knew he was under a lot of pressure from his dad.

Would Ryker and Ella be able to get past their different lifestyles and come together when they were at home or would their fathers get their way and end this relationship? Ryker even had to deal with making the decision if he was going to let Razor kill Ella or if he would do it. You’ll have to read this in order to get the outcome of that little get together they had because it will surprise you. I have to say that I was really pulling for Ryker and Ella to somehow get past all of the issues that were thrown at them. It also gave you a peek at what it is like inside a notorious one percenter biker club. I would love to see Vampire’s book come out next and would definitely pick it up to read. I just found a new biker author to follow.

This book was an ARC was provided by NetGalley for an honest review.