It’s not what she wanted… but it could be what she needs.

Dani’s relationship with sexually fluid Black Halo frontman, Xane Geist is put to the test when she agrees to allow him to explore his desire for sizzling new drummer, Luthor Albrecht. Even with strict rules in place to define what’s acceptable, Dani’s heart is never more than a step away from being broken.

As one crisis after another hits the hard rocking band, Dani must make peace with her traumatic past and overcome her trust issues if she’s to have any chance of holding onto Xane, or turning their uneasy love triangle into something stable and positive.

This is the third book in the Rock Hard series, and the seventh title about rockers, Black Halo.

Boy do I need a cold shower after this crazy hot read! The guys of Black Halo took a break on a private island that Spook has and they are trying to get together so they can regroup after all of the chaos that they have went through as of late. Ash is out of the hospital and he and Ginny are on their way to the island also so that Ash can recuperate from everything that has happened to him. Sorry to say that he is still not able to play his guitar and they don’t know for certain if he ever will be able to again like he had before his fall.

Come Alive really is dealing with Xane and Dani’s sexually charged relationship. Luthor has officially joined the band now as Black Halo’s drummer and has every intention of making the relationship he wants to work with Xane even if that includes sharing him with Dani. And Dani has every intention of not sharing the love of her life with Luthor. The girl is scared to death that she will lose Xane to Luthor and leave her out in the cold. That’s how it works right? Anyway that is how it worked for her mother and father so what else is she to think. Xane will continue his relationship with Luthor if and only if Dani agrees to it. With all of Dani’s hang ups there doesn’t seem to be a chance in hell that she will ever agree to let her lover bed his drummer boy, Luthor.

There is so much at stake because what happens if Xane and Luthor do hook up and then things fall apart does that mean that Black Halo will fall apart also? How does Dani deal with her fear of losing Xane because she is afraid if she holds him back from his attraction to Luthor he will leave her eventually and if she oks the relationship between Xane and Luthor she will lose him that way as well. She’s fighting her jealousy and cannot figure out how Xane can have these feelings for Luthor if he really loves her like he says he does. And oh, my does Xane know how to love! And how is Xane’s ex, Elspeth, going to factor in to all of this because we all know that she has an ax to grind with him? This is a book that you can’t put down because you feel so pulled in to the storyline that has you feeling that exact same push/pull that Dani is going through. So how does this all end for Xane, Luthor and Dani and is this going to be the downfall of Black Halo? 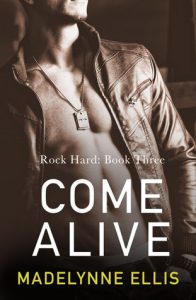