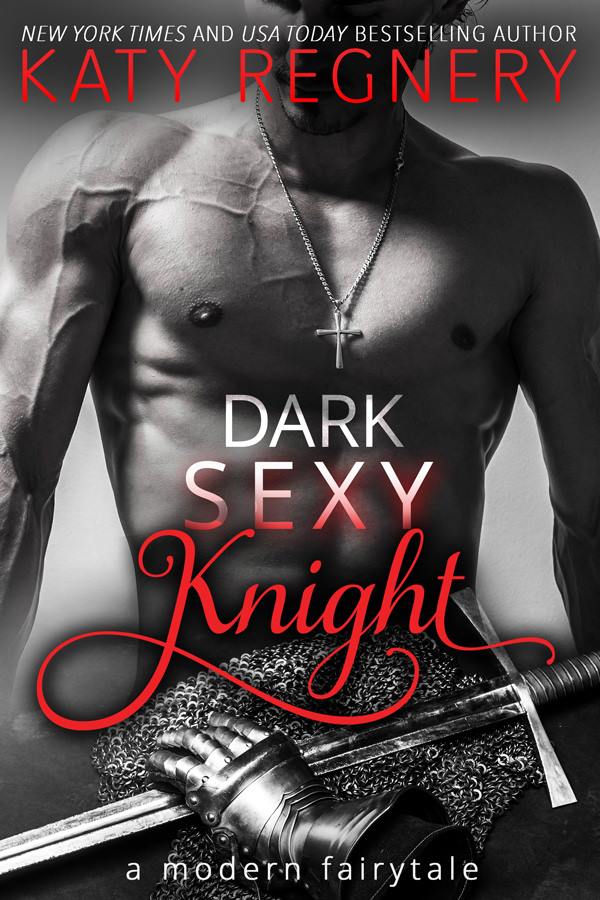 Loosely inspired by the legend of Camelot, Dark Sexy Knight tells the story of dinner theater knight Colt Lane, who meets down-on-her-luck Verity Gwynn on the worst day of her life. Evicted from their home, Verity and her special-needs brother, Ryan, must find jobs or risk being separated. Colt, who is the furthest-possible thing from a white knight in real life, comes to their unlikely rescue, quickly cementing his place in Verity’s heart.

Colt has dark, deeply buried secrets that keep his smile hidden and his eyes down, which has kept people away . . . until he meets Verity, who seems immune to his gruff manners and taciturn ways. The more time Colt spends with her, the more he longs for her sweetness in his life and yearns to be the knight in shining armor she so desperately needs. Certain he will lose her if she learns the truth about his past, he must decide if he can trust her with his yesterday in order to build a beautiful tomorrow.

**Contemporary Romance. Due to profanity, mild violence and very strong sexual content, this book is not intended for readers under the age of 18.**

All novels in the ~a modern fairytale~ collection are written as fundraisers.

5 stars is simply not enough!! I once again find myself at the end of a Katy Regnery novel running combinations of words through my head trying to figure out the best way to express how outstanding and truly epic it was. Alas I find myself tongue-tied and filled with anxiety once again hoping to do this author, her characters and this story justice. I shall endure to articulate how much I truly fell in love with all of them. Not only has Ms. Regnery delivered yet another monumental romance to her expansive library of stories, she has reached deep inside my chest and filled my heart with immense and indescribable joy. I began my journey through Dark Sexy Knight grinning from ear to ear by the end of the first chapter, and notwithstanding the sporadic tears I shed throughout the story, I found myself once again with a huge smile upon my face as I turned the final page.

Verity has been taking care of her older brother since the death of their parents, always feeling as though if it wasn’t for the bad luck she had, she would never have any luck at all. Because of the loss of their home and their lack of money, they are now forced to stay in a rundown fleabag of a motel not that they can even afford that. Left with no other options, Verity decides to visit a local job fair with her brother desperate to find them both jobs before they find themselves evicted and separated.

Colton holds inside the deep dark secret of his past as well as the perilous man he believes himself to be. But the moment he locks eyes with her across the hotel’s expansive ballroom, Colton is drawn to Verity like a magnet between their souls. In spite of the inner-voice continuing to tell him to simply walk away, Colton finds himself unable to turn his back on them. He is mystified to understand how Verity seems to see beyond his rough exterior and the menacing glare which he always keeps in place, simply emanating only profound sweetness and caring towards him. Although he continues to struggle with the internal rage he has spent his life fighting to control, there was a peaceful calm exuded by Verity that simply seemed to extinguish the angry blaze of emotion within him.

As their days together pass, Verity finds herself struggling to comprehend the good luck she has had finding Colton who continues to go out of his way to help two complete strangers. Although he has been nothing but kind to them both, she cannot seem to smother the fear that he will eventually abandon them and push her away. And despite the undeniable connection between them which continues to escalate, Colton’s negative thoughts persist in plaguing his mind as well. Will Verity ever be able to eliminate his doubt and prove to Colton once and for all the knight in shining armor he truly is? Will Colton ever be able to convince Verity that his love for her is everlasting and eternal?

I fell in love with Colton not in spite of who he is but because of who he is. Ok, yes. I am paraphrasing from Ms. Regnery’s words but they fit so perfectly and describe how Colton truly affected me. From his all but immediate connection with Verity as well as her brother grew an indescribable and powerful need to protect them both which was absolutely captivating making me fall instantly in love with him myself. Despite some of the rocky situations they must overcome, I felt that because they have both devoted their lives to taking care of special-needs adults, the connection Verity and Colton shared delved imminently deeper than their hearts, connecting their lives and their souls together for a lifetime.

Katy Regnery has spectacularly outdone herself with Dark Sexy Knight. Although I have read every one of her novels and loved them all, only two have made it to the number one spot on my list. Well move over The Vixen and the Vet and Ginger’s Heart, because you must now share that achievement. Dark Sexy Knight made my heart flutter over and over again, leaving me a bit speechless and deeply touched by the love this “princess” and her “knight” find with each other.

One final note: I wanted to mention the lovely letter Katy Regnery included at the end of this novel to her readers. Although I have never really had any contact or occurrences with a special-needs individual, I have been the recipient of some bullying growing up which is touched upon in this story. And although it was never to the extent experienced here, it affected me very, very deeply. Thank you to Ms. Regnery for what you are doing to help the Prospector Theater. Not only are you a remarkable writer, you are an inspiration, and I am proud to be one of your avid fans/stalkers. I am profoundly glad you are part of my life, even though it is only through your amazing and incredible stories. They always fill my mind, heart and soul with joy and love. 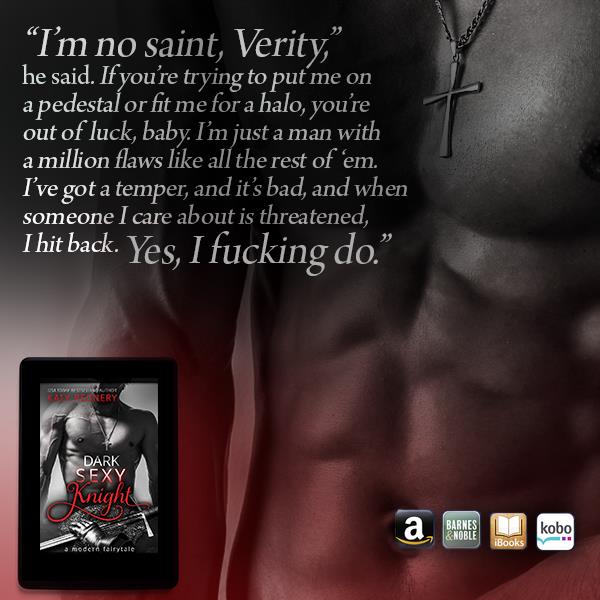 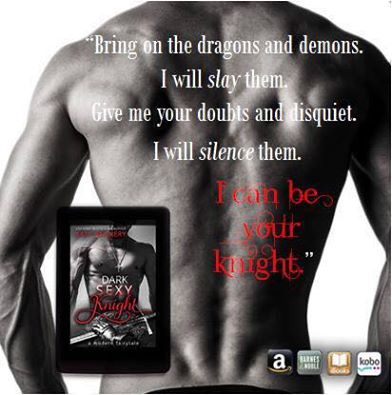 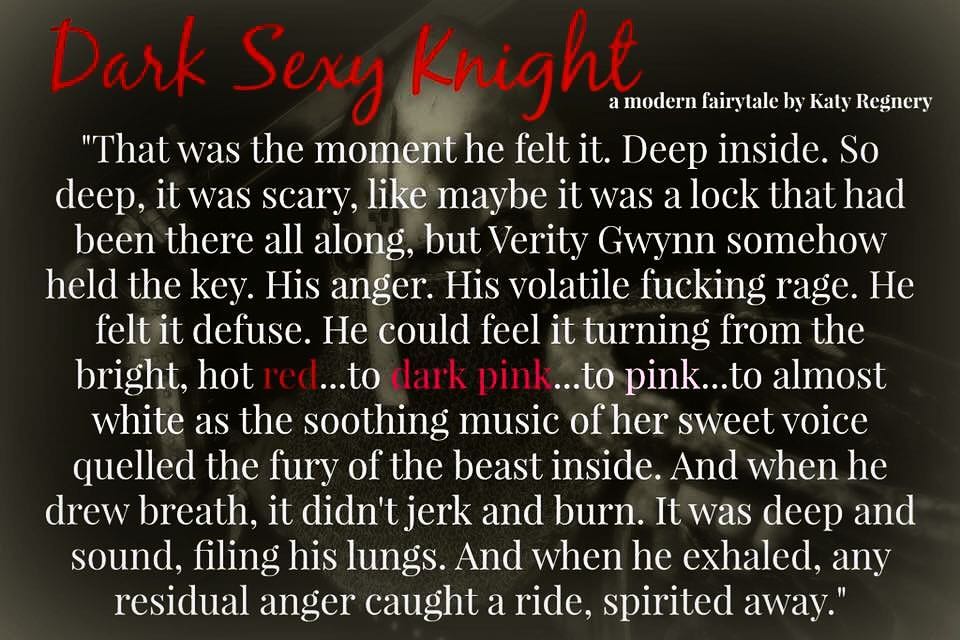 Katy’s first modern fairytale romance, The Vixen and the Vet, was nominated for a RITA® in 2015 and won the 2015 Kindle Book Award for romance. Katy’s boxed set, The English Brothers Boxed Set, Books #1–4, hit the USA Today bestseller list in 2015, and her Christmas story, Marrying Mr. English, appeared on the list a week later. In May 2016, Katy’s boxed set, The Winslow Brothers Boxed Set, Books #1-4, became a New York Times bestseller.