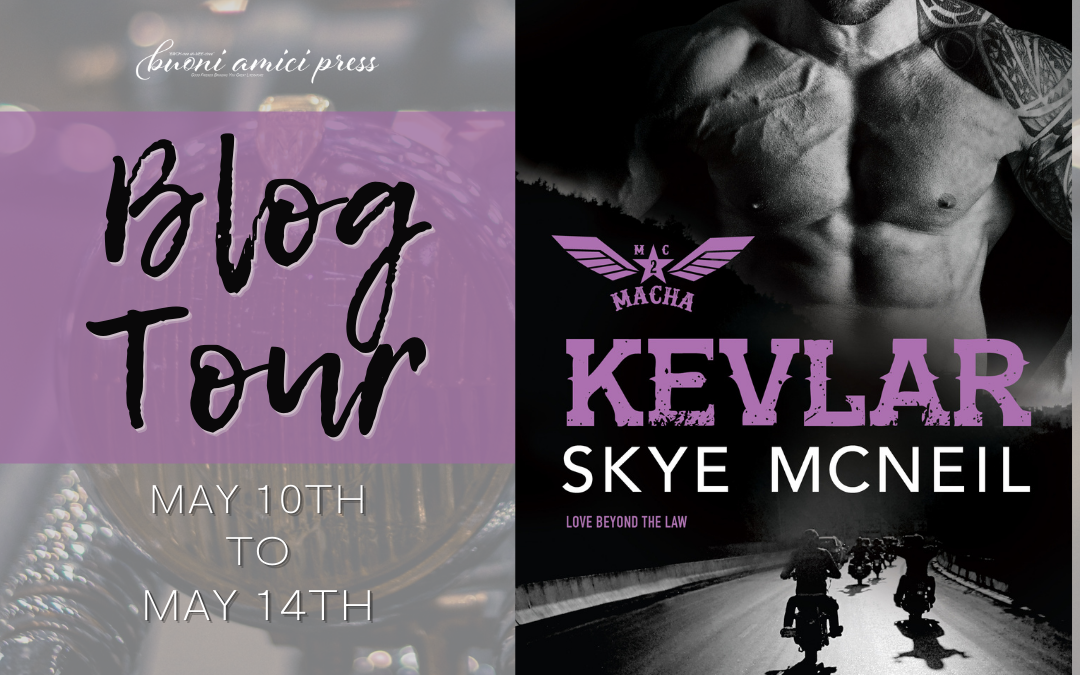 Second chances only come once for an FBI agent and her bad-boy biker in Skye McNeil’s motorcycle romance “Kevlar” (Macha MC #2).

Hunting down criminal motorcycle clubs is Nikita Stockdale’s job as an FBI agent. Her shadowy past is the reason she can’t let any MC slip through her fingers… until a case takes her unexpectedly to the man she thought long gone.

Kevlar Dorous is coasting. In his life and in the club. Recently home from deployment, he decompresses into his new normal. By chance, he sees the woman who kept him grounded in a rival MC bar, and Kevlar can’t help but want to save her.

When Nikita joins forces with Macha MC to take down a human trafficking ring, she has no choice but to return to her dark past in order to save the man she loves. Her well-thought plan goes awry and Kevlar must save her before it’s too late and she’s lost forever.

Will the club bring them together or tear them apart?

“Where are we going?”
Kevlar laced his fingers in Kita’s and grinned back at her. “You’ll see.” He opened the clubhouse door and started toward the garage.
“Please tell me you’re not going to show me a garage. I’ve seen those. Many of those.”
He chuckled and shook his head. “Nah, I know you’re well-versed in that shit.” He led them through the garage and to the side door. Stopping there, he grabbed a helmet and handed it to her. “You still ride, right?”
A confident smile crossed her face. “Does a bear shit in the woods?” She quickly pulled on the helmet. “Now, where’s the bike? I’ve been itching to ride.”
“Well, you could always ride me to ease that urge.”
Kita propped her hands on her hips, the sass evident in her stature and face. “Still a smartass.”
He playfully swatted her ass. “Yeah, you do have a fine ass.” Before she could respond, he pointed to the motorcycle sitting outside the door. “That one. Rubble and I just put her back together the other day. It’s one of the Macha originals as he likes to call them. That guy can make anything mechanical.”
Standing back, he watched Kita carefully inspect the bike. Her tight leather pants tempted him to say screw it to the ride and simply strip her then and there and fuck her against the motorcycle. He let out a steadying breath. It wasn’t about him. Kita was tense and if memory served him, getting out on the road helped relax her. If not, there’s always sex.
“All right, Kita, you ready?”
She swung her long leg over the bike and patted the seat behind her. “Born ready, baby.”
Kevlar hopped on the back and strapped on his helmet moments before the motorcycle lurched to life. She took it easy the first few blocks. Once they were safely out of town, Kita didn’t bother to abide by the posted speed limits.
They zipped along the open road, swerving around cars. Only once did he feel the need to grab her hips. Which of course led to Kita laughing and picking up the speed another notch. He didn’t give a damn if he died riding bitch with this woman. She could have his entire life if she wanted it. He’d gladly turn it over for another moment like this with her.
The motorcycle hugged the curves perfectly. Kevlar made a mental note to relay the test ride to Rubble later so they could work out some of the shifting kinks he felt whenever Kita’s foot switched gears.
After thirty minutes, she pulled over and hung her helmet on the handlebars. She easily slid off the bike, years of doing the act second nature to her. Kita around motorcycles mesmerized him. There was so much about this woman that he didn’t know. He followed suit and walked over to where she stood at the edge of the road overlooking Snowshoe.
“This place is beautiful.” She turned slightly and met his gaze. “I see why you love it here.”
Kevlar swept his eyes over the valley and surrounding mountains. “It’s more my home than any place I’ve lived before.” He jutted his chin to the left. “Macha’s snow lodge is up there. Here soon, the place will be crawling with tourists and extreme sport enthusiasts. It’s kind of fun to be around honestly. Club life is never boring.”
She pushed back her long hair, the wind catching it behind her shoulders. It looked like a perfect modeling shot. A sexy woman in leather and a rocking body that he’d beg to touch. He could come on this image of Kita alone.
“Don’t ogle unless you’re planning on doing something, Macha man.”
The slight smile on her face made him take a step closer. He carefully slid his arm around her waist, his hand dipping between the fabric of her jeans. Goosebumps lined her skin on his contact, and she leaned closer into his chest.
“Don’t tempt me, woman. I’ll take you here and now.”
Kita turned toward him, gorgeous eyes pinning his boots to the dirt. “Prove it.”

Award-winning author Skye McNeil began writing at the age of seventeen and has been lost in a love affair ever since. During the day, she moonlights as a paralegal at a law firm favoring criminal law.

Skye enjoys writing contemporary and suspense romance novels that leave readers craving more and falling in love over and over. She writes contemporary and historical novels ranging from sweet and sassy to steamy and sultry.

Her constant writing companions two cuddly Australian Shepherds, a purring cat, and her daughter. When she’s not writing, Skye enjoys spending time with family, photography, volleyball, traveling, and curling up with a cup of coffee and reading.