…the same day Hallie pledged she would never, ever speak to Ian again as long as she lived.

Hallie Gilbert has had an especially awful year. When her husband of five years left her, Hallie’s 4-year-old daughter, Jenny, essentially stopped speaking. Add to this, Hallie had to sell her Boston apartment to pay her husband’s exorbitant credit card bills. What Hallie needs is an uncomplicated autumn at Colby Cottage, her family’s summer home in Sandwich, NH, where she and Jenny can re-group and figure out what happens next.

But Colby Cottage, located adjacent to the Summerhaven Camp, has not been well-maintained and Hallie finds it in such disrepair, it’s almost unlivable. When nearby camp owner, Rory Haven, arranges for his brother, Ian, to handle renovations for Hallie, her plans for an uncomplicated autumn suddenly get a lot more challenging.

It has been a long time since I have read a book that captured my attention so much that I finished it in one day.  That is not to say I haven’t completely loved the other stories I’ve read, but Katy Regnery’s newest release, Loving Irish, from her Summerhaven Trio series, grabbed ahold of me and didn’t let go.  I simply couldn’t stop reading Ian and Hallie’s story until I knew how it ended.  In reading the synopsis of their romance, I anticipated that Ian and Hallie were going to deeply touch my heart, and they most certainly did.

Ian and Hallie’s love began when they were teenagers.  When they finally reach the time that they’re ready to consummate their love, inescapable meddling interferes with their young romance, leaving their hearts devastated and shattered.  From that moment, both of their lives take unexpected turns leaving Ian struggling with drinking and Hallie with continued uncertainty and mistrust in men.  But there was always something about Hallie that had taken hold of Ian’s heart and it never let go.  So when they are unexpectedly reunited ten years later, Ian holds out a deep hope that he will be able to make things right.  After all, true love can always find a way.  But after shattering Hallie’s heart all those years ago, she keeps the walls erected where Ian’s is concerned and refuses to ever let him hurt her again.  Though Ian tries to adhere to Hallie’s wishes to keep his distance, and he endeavors to do so, the love he has always had for her remains unfaltering, and he finally begins to break down her defenses.  Will Hallie ever be able to open her heart back up to Ian so they can find the forever in each other’s arms they had always hoped for?

We, of course, met Ian in books one and two of this series but in Loving Irish we get to delve more deeply into what transpired in his past to lead him down the path he had ended up on.  Witnessing his reunion with Hallie and his interactions with her daughter, Jenny, made my heart flutter, and the gentleness and deep consideration he shows for them both made me swoon.  My heart was so completely captivated that I just couldn’t put my iPad down.

Loving Irish is the third story in Katy Regnery’s Summerhaven Trio series and is my new favorite of the three.  It is a second chance romance that with leave your heart quivering with contentment, happiness and love.  Of course, Ms. Regnery gives us the happily ever after we love and have come to expect from her, but I am always simply amazed at how she completely captivates my heart making me fall in love over and over again with her characters. 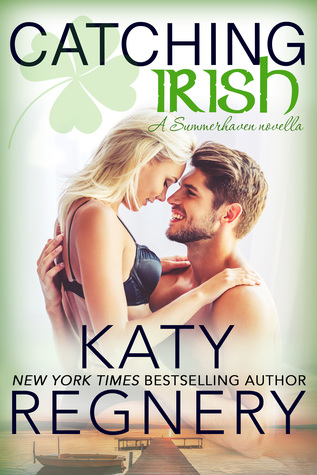