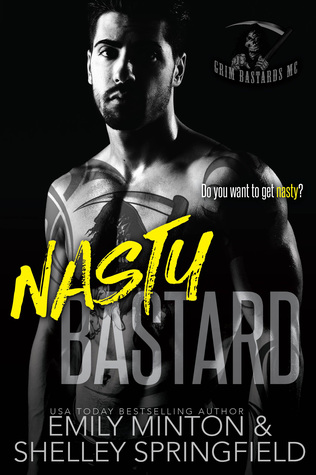 She’s the daughter of a club traitor, trying to start over.

Daughter of the man that betrayed the Grim Bastards, Gidget Etheridge doesn’t want anything to do with the club.

She grew up being ignored by her father, but found solace in the arms of the boy she loved.
Everything changed the day he turned his back on her.

When she and her son are rescued by Smoke, she has to decide if the boy who broke her heart is worth a second chance.

He’s a bastard, living life by his own rules.

Vice President Smoke Roundtree grew up knowing he would be a Grim Bastard, just like his father and grandfather.

When he became a prospect, he made a choice between the club and the girl he loved.

Even all these years later, he still wonders if he made the right decision.

When he saves Gidget and her son, he finally has a chance to fix the mistakes of his past.

Can a bastard heal the heart he shattered thirteen years ago?

Get yourself ready for a nasty bastard because really is there anything better than a Bastard that’s nasty! Smoke and Gidget were childhood friends who were brought up within the Grim Bastards clubhouse since both of their fathers were members. Their friendship turned into high school sweethearts and Gidget had planned to marry the man she loved as soon as she graduated. Smoke wanted nothing more but to marry this girl and take his rightful place within the Grim Bastard MC. They had it all planned out and Gidget would go to a local school to become a nurse. Gidget had an aunt who had offered to pay for her schooling but in trying to get Gidget away from that bad boy biker she placed a stipulation that she would have to leave Trenton and go to school in Kentucky. Even with the offer of having college paid for there was no way that Gidget would leave the man that she loved; that is until Smoke pushed Gidget away. This gave her no reason to stay in Trenton any longer so she took her aunt up on her offer and tried to start a new life without the man she had loved and planned on spending the rest of her life with.

Now fast forward some years and Gidget has become a nurse, had a son, and is divorced from a man who was all about this new women in his life and who didn’t want their son, Parker. She ends up bringing Parker back to Trenton to live in the home she grew up in. Gidget’s father, Stone, was never a father to her and he become a traitor within the MC along with Gidget’s brother. With her father and brother missing she figured that they finally met their end which she didn’t shed a tear over.

As for Smoke, he became VP of the Bastards and never settled for another girl who he wanted to become his Old Lady. He could never get Gidget off his mind. So why did he push her away all those years ago? Now that he finds Gidget badly beaten hiding in a closet with her son, he swears there is no way he is ever letting her walk away again. But shouldn’t that decision be up to Gidget since Smoke is the one who pushed her away before? Let’s add in to the fact that there is a crazy assed whore that wants nothing more than to become Smoke’s Old Lady and will stop at nothing to make it happen.

This is one hot, sexy read with a lot of twists and turns and has you guessing just what is going to happen next. Nasty Bastard is the kind of book that has you up until 3 a.m. because you can’t put it down. There are lives lost, promises broken and some very erotic scenes with Smoke and Gidget. All during this you don’t know if Gidget is willing to trust that Smoke won’t push her away again because not only will she not be able to handle it, she now has a little boy that idolizes Smoke and could be hurt just as well. Is she willing to set Parker up for the heart break that she knows that Smoke had done once before. The Grim Bastards series is a fantastic biker read that gives you a look into the biker life and the women these men are drawn to.

This book was provided as an ARC from the authors for an honest review. 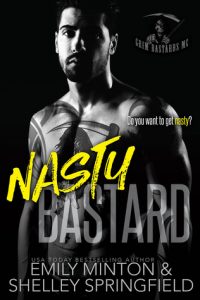