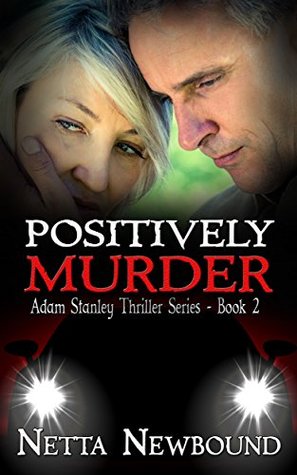 For Melissa May, happily married to Gavin for the best part of thirty years, life couldn’t get much better. Her world is ripped apart when she discovers Gavin is HIV positive. The shock of his duplicity and irresponsible behaviour re-awakens a psychiatric condition Melissa has battled since childhood. Fuelled by rage and a heightened sense of right and wrong, Melissa takes matters into her own hands.
Homicide detective Adam Stanley is investigating what appear to be several random murders. When evidence comes to light, linking the victims, the case seems cut and dried and an arrest is made. However, despite all the damning evidence, including a detailed confession, Adam is certain the killer is still out there. Now all he has to do is prove it.

This is what other people are saying about Positively Murder.

After the fantastic ‘Behind Shadows: A Psychological Mystery Thriller (The Adam Stanley Series Book 1)’, I hoped Ms. Newbound would turn this into a series and quickly release Book 2. Once again the wonderfully talented writer does not disappoint with this lightening speed sequel. Deviating massively from the plot line of the first book, this sequel picks up not long after the end of Book 1, and whilst not focusing on a lot of the characters from said book, apart from Adam Stanley of course, they do feature along the way, which is nice to read as I was so invested in those characters, that it is nice to find out where they all are now. Whilst Book 2 is not as nearly as shocking, it is no less of a thrilling read, even though we know from the start who is dispatching the victims into early graves and why. The way Melissa dispatches said victims once again makes my over active imagination run riot, but I have come to expect that from Ms. Newbound, as she does seem to favour a ‘little bit’ of horror and gore.
Saying the above, I really felt for the main character as empathy spilled from it’s pages, whilst at the same time hoping her Husband got what was coming to him also.
Does he get what is coming to him? Well the answer is…. buy the book and find out for yourself. I guarantee you will not be disappointed by the end on many counts!
Congratulations to Ms. Newbound on a brilliant sequel.
Here’s to Book 3! – Mr Marco Lewis

Read this in a day, full of suspense, easy reading and you get into the storyline straight away which I like, a real page turner, just like the first book in this series.

Roll on Book 3 in the Adam Stanley series, I am now well and truly hooked on Netta Newbound and I can thoroughly recommend you will not be disappointed. – Carol Drinkwater

Loved this book. Totally different than I expected. It started off with a husband telling his wife he had HIV and obviously she was tested positive too. But what happens after surprised me. I loved the character Mel the wife and her actions changes the whole story. I have read one or two by Netta and have loved them. Well done – Helen Lancaster

Another brilliant book. Can’t wait for the next one. Once again couldn’t put it down, definitely recommend to anyone that loves a good psychological thriller. – A Brady

This is the first book by this author I have read. Needless to day what in the world did I just read?
It takes guts to write a murder suspense. I mean to sit there and type those scenes, it’s just crazy!

Melissa May’s life was turned upside down by her husband. 30 yrs of marriage down the drain because he couldn’t keep it in his pants.
Not only did he cheat through out their whole marriage but she literally had no idea. So when they had some tests done it all came out in the open. I swear she went crazy, but in a calm way at first.

Gavin’s secrets were now Melissa’s secrets. Whenever he mentioned he wasn’t going to be home, she would find him, watch him, then do what any person might do in her situation. Well not everyone! I think counseling and talking it through and getting a divorce would’ve been the right thing. Like I said Melissa went crazy, talking to herself, then her mother! However her mother wasn’t there.

Adam Stanley was the detective on the case. He knew, he had a feeling that Gavin was innocent. As Adam was trying to get his life back together, he is put on the case of a serial killer. I haven’t read the first book in the series, so not sure if this can be read as a stand alone or not. There is Amanda who is from the first book, and her brother. There is mention of what happened in the first book. However Positively Murder is about Melissa and her killing spree.

You can say 2 wrongs don’t make a right. Melissa totally out her mind let her mother take over her mind, her body and her actions. In the end of the book where everything was said and done with Melissa you knew she lost her marbles. What she thought she was doing was right, but really she was hurting more people in the long run.

The bit with Amanda and her niece, that hit home. I have a sister out there was created from my mom being raped by family members. As I read that chills ran down my arms. I wonder what the next book will be about and if Amanda will tell her secret or secrets to Adam. 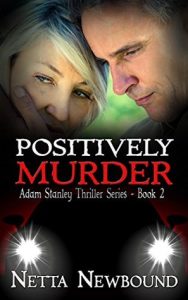