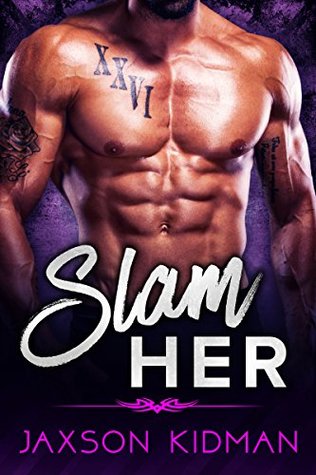 Her old man put me in jail – so I stole her innocence.

She’s completely off limits, but I’m an outlaw who gets what he wants, when he wants it. As soon as I set my sights on Belle, I know I’m looking for real trouble. But I can’t help it. We’ve had encounters in the past, but right now, it’s all personal.

The only problem is the more I get to know her, the more I care. I’m told by the MC to stay away from anything that could have me back in prison, but when Belle confesses a dark secret from her past, I know the only way out of the mess I created is the truth.

The truth is going to hurt her… but what I plan on doing to show her my love, well, it might just cost me my life.

This is another hit for the new up and coming author Jaxson Kidman. He has got a knack for writing some pretty down and dirty biker books and Slam Her is another winner. Slam is the heavy hand for the Reapers and is used to solving issues with violence….he likes to think with his fists…or gun. Women mean nothing to him but a means to an end. He just found out that he is getting out of prison and he has a score to settle in the name of Chief Richards. The Chief has been after Slam ever since he was a kid and has been a constant pain in his a**. Sure Slam does illegal things but what do you expect from an outlaw biker! The problem is that Slam was sent to prison this time on a set up and Slam knows exactly who is behind it. What better way to get back at the Chief but by his only daughter, Belle.

It’s just been Belle and her dad since her mom was murdered and she has always been sheltered. Her daddy knows how to keep all of those boys away from her because who wants to get on the bad side of the Chief. Belle has her v-card yet and sees no reason to give it up…until Slam. The problem with this is that Slam has come up with a plan to get back at Chief Richards and that is to get to his daughter. He plans on taking her virginity, knocking her up, and then leaving her high and dry. That was a good plan at first but then Slam learned things from Belle and things began to change. What was that change that took Slam on a different path as far as Belle was concerned and what exactly is the Chief capable of if he finds out that the guy he has chased after all of these years is seen leaving Belle’s apartment? Even if Slam comes clean with Belle will she ever be able to forgive him for using her in this way?

There are a lot of unanswered questions that’s a perfect set up for this book of a dirty outlaw biker and the police chief’s daughter. There is so much at play in the relationship of these two that you won’t want to stop until you see how this will all play out. This is a definite read for any biker lover who knows how dirty these bad biker boys are!