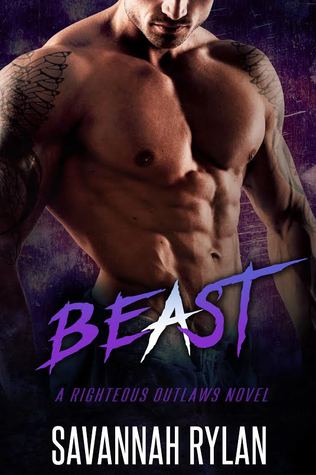 Bentley “Beast” Harris became a Righteous Outlaw over a decade ago and never looked back. He gained the reputation as being the deadliest among the Outlaws, a skilled killer with no remorse or regrets. What his brothers don’t know is beneath the dark, death stare, and permanent scowl, he is drowning in regrets from a past he can never go back to.

Ryan Stanson grew up with dreams of becoming a police officer like her father, despite her mother’s objections. After a deadly mistake that took the life of her partner, Ryan is ready to leave the dangerous city life behind her and go home to Black Hills to start over. When Ryan takes a call to check out the local docks, she soon realizes that the small town she grew up in is more dangerous than the city she left behind, and Beast is at the center of it all.

Two damaged souls, refusing to forgive themselves for mistakes of the past, are brought together. With one on the right side of the law and the other on the wrong side, will what they share be enough to destroy the divide that keeps them apart? And will these two be able to come to terms with their pasts before they destroy themselves and everyone they love in the process?

Beast is a big nasty looking biker who usually will answer with a grunt or one word and has one mean temper but this big mean nasty biker has a 5 pound yorkie named Beauty. So is there really a softer side to Beast that he doesn’t let anyone see? It’s also easy to judge someone when you don’t know the whole story behind their behavior. That’s where good looking cop, Rylan, comes in. Her dad has been the sheriff of her hometown of Black Hills for as long as she can remember and was now going to be retiring. Rylan had been a cop in Detroit but when tragedy strikes Rylan blames herself and leaves everything behind for the opportunity to be her dad’s predecessor in Black Hills. There are things about the way her dad ran things that aren’t all above board but he looks at the bigger picture and choses what is best for the town he serves and he figures that Rylan is that type of person also. The Righteous Outlaws are just that; outlaws but they also feel a responsibility to the town they live in and have every intention of keeping the “bad” guys out. This proves to be a problem when there are gangs who don’t give a crap about Black Hills and only want to grow stronger and make money no matter what the cost.

Beast goes to meet with the person who will be taking over the sheriff’s job and is making sure that the agreement the Righteous Outlaws have with the sheriff will still be intact. All he knows is that it is one of the sheriff’s kids that have come back to town with the name of Ryan. Beast was shocked when Ryan turned out to be a beautiful woman…even if she wore an ugly as hell tan uniform. These two form a special connection with Beast watching out for Rylan and letting her know who the really bad guys are in this town and why the Righteous Outlaws do some of the things they do. Rylan knows that there is something behind Beast and his persona and she is determined to find out what made Beast the man he is. Imagine her surprise when she starts to learn things little by little with one of them being that he is a decorated Marine vet who received a medal of honor from the President of the United States! But there is much more to what makes Beast this way. Is Beast ever going to come clean to Ryan about his past that has sent him into some extreme PTSD episodes which she has witnessed? How can a sheriff actually have any type of relationship with a biker and how are the town’s people ever going to trust in a sheriff who hangs out with one of the bikers from the MC in town?

Beast will have you reading it in one sitting because it draws you in and doesn’t let go. There are times that are hilarious and there are also times that are so sad that tears will come. This is my second Righteous Outlaws book and I have become a real follower of this series and Ms. Rylan. I can’t wait to read more on this MC!