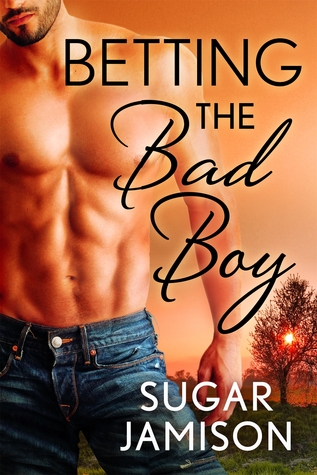 The Bad Boys of Destiny are back and this rugged Alpha is in for the surprise of his life when he comes back to town.

Ten years ago, Duke King knew that getting involved with Grace Truman would only bring trouble into his already hard life. After all, the son of the town drunk has no business falling for the judge’s daughter…a passion that led to disaster and ended with Duke serving a ten year prison sentence. Duke never wanted to return to Destiny, especially now that he’s built a multimillion dollar custom car empire with his brothers. But when his sick aunt calls him home, he must face his past and discover a secret that instantly changes his life.

Grace never thought she would see Duke again, especially after years of silence. But when Duke comes storming back into her life, looking hotter than ever, and determined to get to know the son he never knew he had, she realizes that maybe she’d been wrong about him so many years ago. So Grace decides to make Duke a bet. If he can stay in the house with them for the next thirty days and prove he’ll be a good father, she’ll agree to letting him be part of his son’s life. If not, he’d better be prepared for a fight.

Going from single guy to family man isn’t going to be easy for Duke, especially with the still sexy, now fiery, Grace clouding his every thought. Can Duke be the man he never thought he could be or will his old bad boy ways be too much to conquer?

This was a book that kept your heart going in so many directions; breaking because of the circumstances that led to Duke and Grace’s being apart so many years and beating fast because the chemistry they had after everything they had went through was crazy. (Even if this was something that Duke didn’t want to readily admit to.)

Duke and Grace were finally a couple after Grace turned 18. Duke wasn’t stupid, he knew that with Grace having a judge for a father and coming from a much higher class than he was, Duke could be looking for all kinds of trouble. Duke may have been the bad boy back then but it was Grace who had seen through all of that and knew the kind of man that Duke really was. How can you not fall in love with the bad boy whose mother died when he was young and left the 3 boys to fend for themselves with the drunk, abusive father who eventually took off and left Duke in charge of his two younger brothers. Duke was driven to steal but that was to get food for his younger brothers. He knew he wasn’t good enough for Grace even if he was falling for her. He did the only thing he could back then when he found out Grace was accepted to an Ivy League school but wasn’t going to go because she didn’t want to leave him; he broke up with her. Told her whatever he had to in order to make that break with Grace so that she would do better for herself than to hookup in this town with a guy who had nothing to offer her? After all the cruel things that Duke had said to Grace she thought one way to get back at him for hurting her so was to go out with one of the higher class people that her daddy would approve of. Things took a bad turn for Duke when he seen this “good guy” taking a swing at Grace. Duke saw red and was close to beating him to death. This cost Duke 10 years of his life in prison. Yes, he did beat this guy but all he could see what that red handprint on Grace’s face and how upset she was. No matter what he had said to Grace, Duke really did love her. Did daddy approve of this guy now that he tried to make Grace do things she didn’t want and then hit her? This was her dad’s chance to get Duke away from Grace. Duke was railroaded to prison.

Soon after Duke was arrested Grace found out she was pregnant with his child and tried numerous times to send letters to Duke in prison to let him know of their baby. Grace never heard from Duke so only assumed that he didn’t want anything to do with her or their baby from that point on. When Duke was released from prison Grace was scared to let Duke know he had a son. What had hard time in prison done to Duke especially since he was so angry going in? Is this really someone that Grace would want around their son, Ryder? Grace had spent all of this time distancing herself from her family and making a life for her and Ryder. She worked two jobs went to college to become a RN and did whatever it took to give Ryder what he needed. Duke did unbelievably well for himself as well once he was out of prison. He became a billionaire customizing cars for the elite. Duke employed his brothers and also took on other ex-cons into his employment building this mega business. He had more money than he knew what to do with.

With Duke’s aunt summoning the King boys back to town because she was in ICU she had things she needed to say to the boys. Duke thought he had seen a ghost when he got to the hospital and thought he had seen Grace. Would Grace let Duke into their lives especially with him never acknowledging her letters telling him of baby? Would Duke be able to buy his way back into Grace’s life and how would Ryder accept him as his dad? This chemistry that Grace and Duke had never did seem to go away either after all these years. But is that enough to try to bring them together with all of the hurt they both had piled on from each other with Duke turning his back on a pregnant Grace and Grace not reaching out to Duke once he was released to tell him about his 13 year old son.

This is the first time I read this author and will not be my last. I am definitely going to follow this series and cannot wait to see what comes next for the King brothers. It keeps your heart raw and rooting for true love and the idea of a “real family”. (Plus it didn’t hurt that Duke along with his brothers are complete badass guys.) This was a real feel good book and left me wanting for more.

Sugar Jamison is a southern belle trapped in a New Yorker’s body. With a love of big hair and high heeled shoes, she spends her day at her very normal day job and night dreaming up sweet but sassy romances.