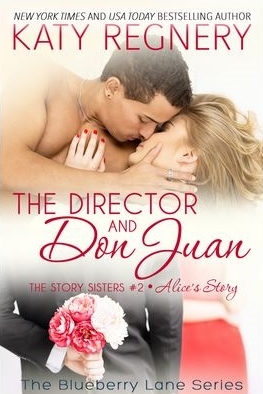 The Director and Don Juan by Katy Regnery is LIVE!
FREE with Kindle Unlimited!

The Director and Don Juan is the second of four books about the Philadelphia-based Story sisters who are all on the look-out for love.

Heiress Alice Story left her father’s company three years ago in a blaze of glory, inviting all of his employees to jump ship and join her, but only one accepted her offer: mail room clerk, Carlos Vega.

While Alice spent the next three years getting her own company off the ground, Carlos became her indispensable right-hand man — executive assistant and office manager, loyal counsel and trusted co-worker.

And all the while, they were quietly falling in love with each other.

When Alice is offered a lucrative business deal in Puerto Rico, island-born Carlos is the perfect person to accompany her on her trip as translator, but as they travel together from Philadelphia to Santo Domingo to Ponce, two unlikely co-workers will discover that during their three years working together, their feelings for each other have grown far deeper than they ever could have guessed.

And though business-minded, proper Alice will try her very best to ignore the longings of her heart, scorching hot, insanely sexy Boricua, Carlos, has no intention of letting her go.
***

The Director and Don Juan brings us back to the much loved Blueberry Lane series by Katy Regnery, the monarch of romance.  This time we are given book 2 in The Story Sisters ventures, with the love story between of Alice and Carlos.  I loved Alice’s strength from book 1, but here we are given the opportunity to see her vulnerabilities and self-doubts as well which I adored.  And Carlos – OMG!  What can I say about Carlos?  Although we hadn’t really met him before, I fell in love with him instantly.  The depth of his feelings for Alice was completely translucent in his display of how unconditionally he cared for her as he took care of her, protected and watched over her.  Though it was not apparent from the inception of the book how deeply Alice felt for Carlos, with the turn of every page her true feelings for him finally begin to shine through.  And as Carlos proves to Alice that his heart has always belonged to her, she is finally able to open up her heart to him as well, at long last melding their souls together and finding the love they deserve to find and share forever.

Katy Regnery never really surprises me with the fantastic stories she continues to write.  The world and characters she creates in each of her novels makes me fall in love over and over again.  And the connection between Alice and Carlos has once again accomplished that.  Her amazing romances continuously leave my heart fluttering and The Director and Don Juan has brought forth that feeling for me once again, leaving me with a smile on my face and my soul full of contentment and love.