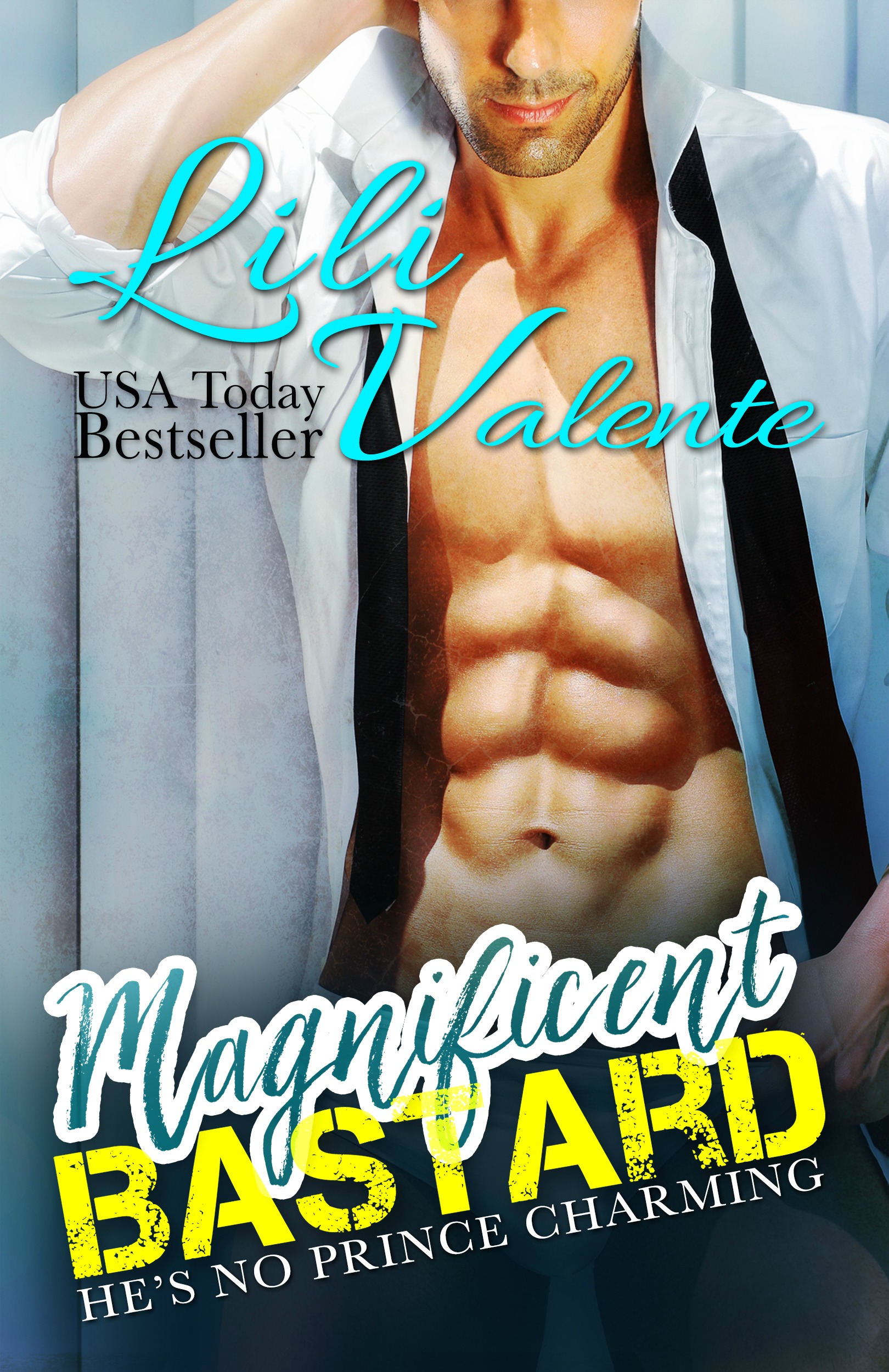 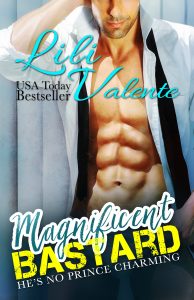 Face it, ladies: love sucks and then you cry…while your ex rides off into the sunset banging your best friend.

But why let a break-up end in tears when it can end with sweet revenge? Enter Magnificent Bastard Consulting and me, chief executive bastard. I’ve got it all—looks, brains, a heart of gold, and the killer instinct guaran-damn-teed to make your ex regret the day he said goodbye.

With the help of my virtual assistant, I’ve built an empire giving broken-hearted women the vengeance they deserve, while keeping myself far from the front lines of the heart. Life is a bowl of cherries, until my virtual assistant shows up on my real doorstep for the first time, begging for a Magnificent Bastard intervention of her own.

I pride myself on being a true pro, but pretending to be her lover soon leads to giving it to her good, hard, fast, and up against the wall. And somewhere between getting balls deep in my sweet and sexy assistant and watching her ex beg for a second chance, I break every last one of my damn rules—professional and personal.

So what’s my next move? Fight for the girl who makes me want to get up on a white horse and ride to her rescue, or stay a Magnificent Bastard to the end?

Magnificent Bastard is dazzling and, well, MAGNIFICENT.  Lili Valente has pulled out on the stops with this outstanding story filled with laughter, one-liners and a mass of hot, sexy knows-no-bounds love shared between two superlative characters.  The hilarious banter of conversation between Bash and Penny was fantastically entertaining.  This is Ms. Valente’s first full-length novel and with it she has definitely hit a home run.

Sabastian Prince (Bash) run a business helping women attain revenge on men who have broken their hearts.  He’s fantastically brilliant at playing the role of their new love interest while making their ex’s pay.  After having his heart irreparably broken, Bash has learned to use his body and mind, and yes his “bastard” capabilities – with the help of his longtime assistant, Penny, whom he has never actually met – create a lucrative business of revenge while keeping his heart kept locked away.  But when Penny unexpectedly appears with a broken heart of her own and seeking his help, Bash just can’t say know.  Though after working together for the past two years they’ve developed an undeniable connection between employer and employee, as Bash and Penny now begin working together in close proximity, the virtual connection they shared begins to develop into reality.  But will Bash realize his link (need a synonym for this) with Penny for what it truly is or will his fear of heartbreak continue to keep his heart protectively locked away forever?

This story is told from our hero’s point of view which actually makes Magnificent Bastard interestingly fun and a nice change of pace.  One of the best parts of this story for me is the text messages and emails written between Bash and Penny which are absolutely laugh-out-loud hilarious.  Although they’ve made a mutual agreement to maintain a “strictly friends” arrangement, the sexual escapades shared between them are sexy and scorching hot, hot, hot making you quickly realize (and hope) that with such an undeniable connection of souls, friendship is never going to be enough.

For me, Lili Valente is the queen of eroticism and she once again maintains that title.  But with Magnificent Bastard she has definitely travelled far beyond leaving me with moments of a jaw-dropping ache in my heart and then brilliantly mending that ache with amazing fervor and a love that ultimately never surrenders.

Picture this: it’s a rainy spring day in the city. The streets are covered in a fine layer of mud and soggy garbage, the sun is a distant memory from another, brighter time, when you were still stupid enough to believe in happy endings, and you’ve just been dumped so hard your heart looks like it’s gone three rounds with Mike Tyson. You’re ugly crying in a corner with a box of wine and a chocolate bar the size of your forearm, wishing Prince Charming would come scoop you up on his white horse and carry you far away from all those nasty memories of Mr. Wrong, but I’m here to tell you, ladies—

You need to stop that shit.

Why? Because Prince Charming is a crock of shit. He doesn’t exist and even if he did, he’s a fucking wimp.

When you’re down and out and your heart has been ripped to shreds by an asshole with a dickish-side a mile wide, you don’t need Prince Charming. You need a man who’s not afraid to get his hands dirty, a man who can teach Mr. Wrong a thing or two about what it feels like to be deceived, betrayed, and laid low by the one person in the world you thought you could trust. What you need is a Magnificent Bastard, your very own one-man vengeance machine.

Love isn’t a fairy tale, sweetheart; it’s war, and now you’ve got a soldier with an anti-asshole missile on your side.

Want to ruin your ex’s reputation? No problem. Every true asshole has a few skeletons in his closet and I specialize in making skeletons dance out of the darkness and into the light. Want to send that fucker to jail? A little harder, but often still possible. I only accept cases involving the very worst examples of mankind, the most miserable liars and cheats and scoundrels. Those types tend to be good at covering their tracks, but I’ve delivered exes locked in police cuffs before.

Want to make your former lover green with envy? Make him wish he’d never kicked you off the love wagon, spat in your face, and walked away? Well, that, cupcake…that’s what I’m best at.

I’ve been blessed with a face that turns heads, worked hard for a body that inspires shudders of lust at twenty paces, and honed my envy-inspiring skills into a razor sharp weapon I wield with ruthless efficiency. I will make you feel like a queen and ensure your ex doesn’t miss a minute of it. You’ll be treated like an irreplaceable treasure, pampered like a princess, and kissed like a slut who can’t get enough of my magnificent dick.

In reality, of course, things between us will never go further than a kiss, but your ex won’t know that. He’ll see your flushed cheeks, lust-glazed eyes, and wobbly legs and think I’m giving it to you hard every night.

He’ll imagine my hands on your ass, my fingers slipping between your legs, and your pussy slick and dripping just for me. He’ll imagine you screaming my name while you ride my cock and remember all the times he was lucky enough to be balls deep in your incomparable snatch. Before long, he’ll have a jealousy hard-on so bad he’ll come crawling back to you on his belly, begging for a second chance.

But you won’t give it to him.

Did you hear that? Even so, it bears repeating—

You. Will not. Give that fucking loser a second chance.

By the time I’m through with you, you will know deep down in the marrow of your bones that you’re

better than that. You’ll understand that you deserve a man whose eyes won’t wander, whose hands won’t hurt, and whose heart belongs to you and only you. By the end of our time together, you will be able to look down at the sniveling, pathetic, limp-dicked excuse for a man you used to love and tell him that he has no power over you.

Not anymore. You will be free to move on with your life without any of the ugly, bad breakup, psychic baggage.

And that, gorgeous, is the most important of the services I deliver. I give you back to you, the only person who can be trusted to steer your course as you ride off into the sunset.

But if for some reason, you break this all-important rule. If you sour the gift you’ve been given by going back to Major Dickweed, don’t bother contacting me again. No amount of money will convince me to pick up the phone.

A Magnificent Bastard intervention is a once in a lifetime opportunity. One and done, no exceptions. 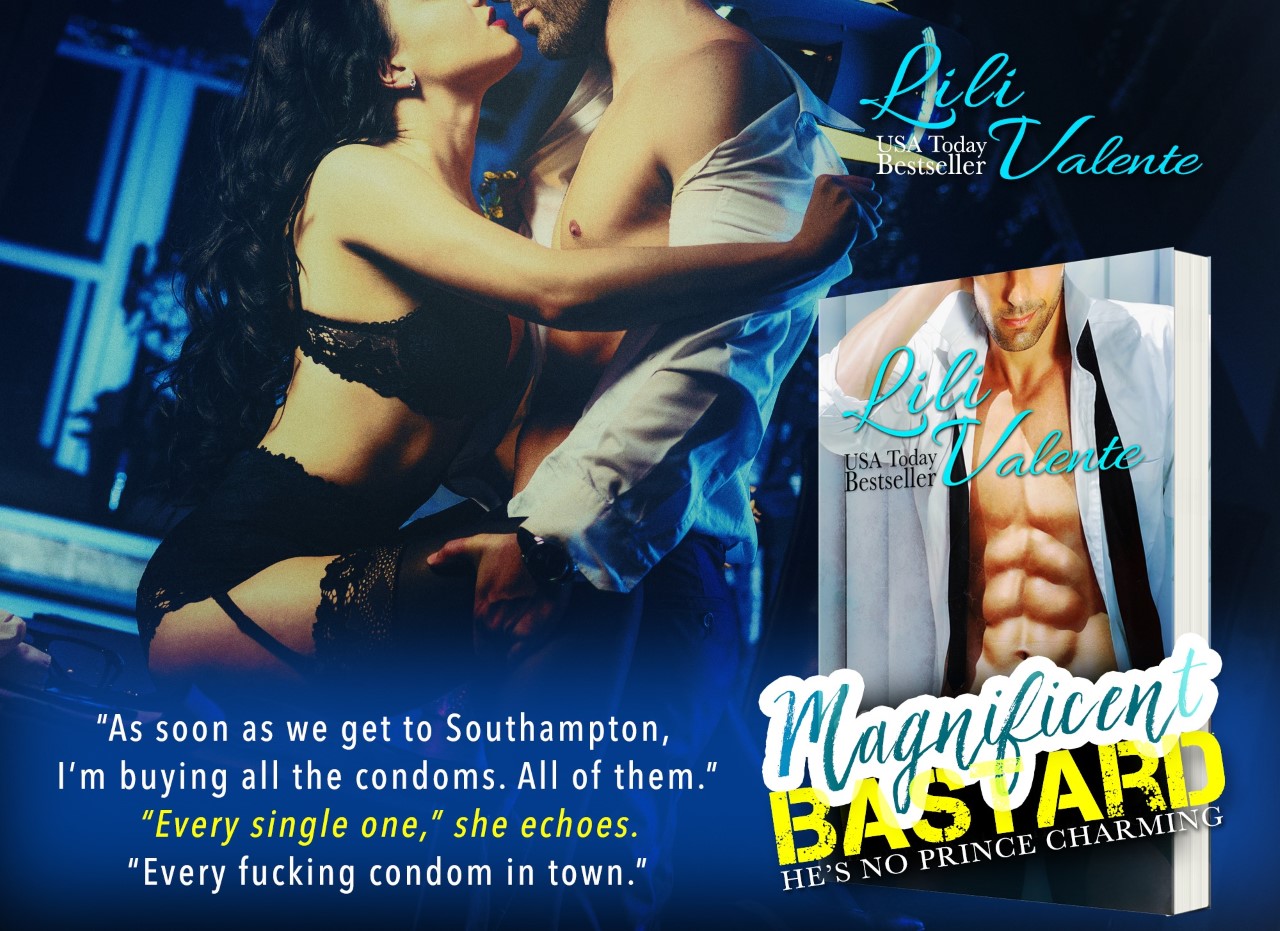 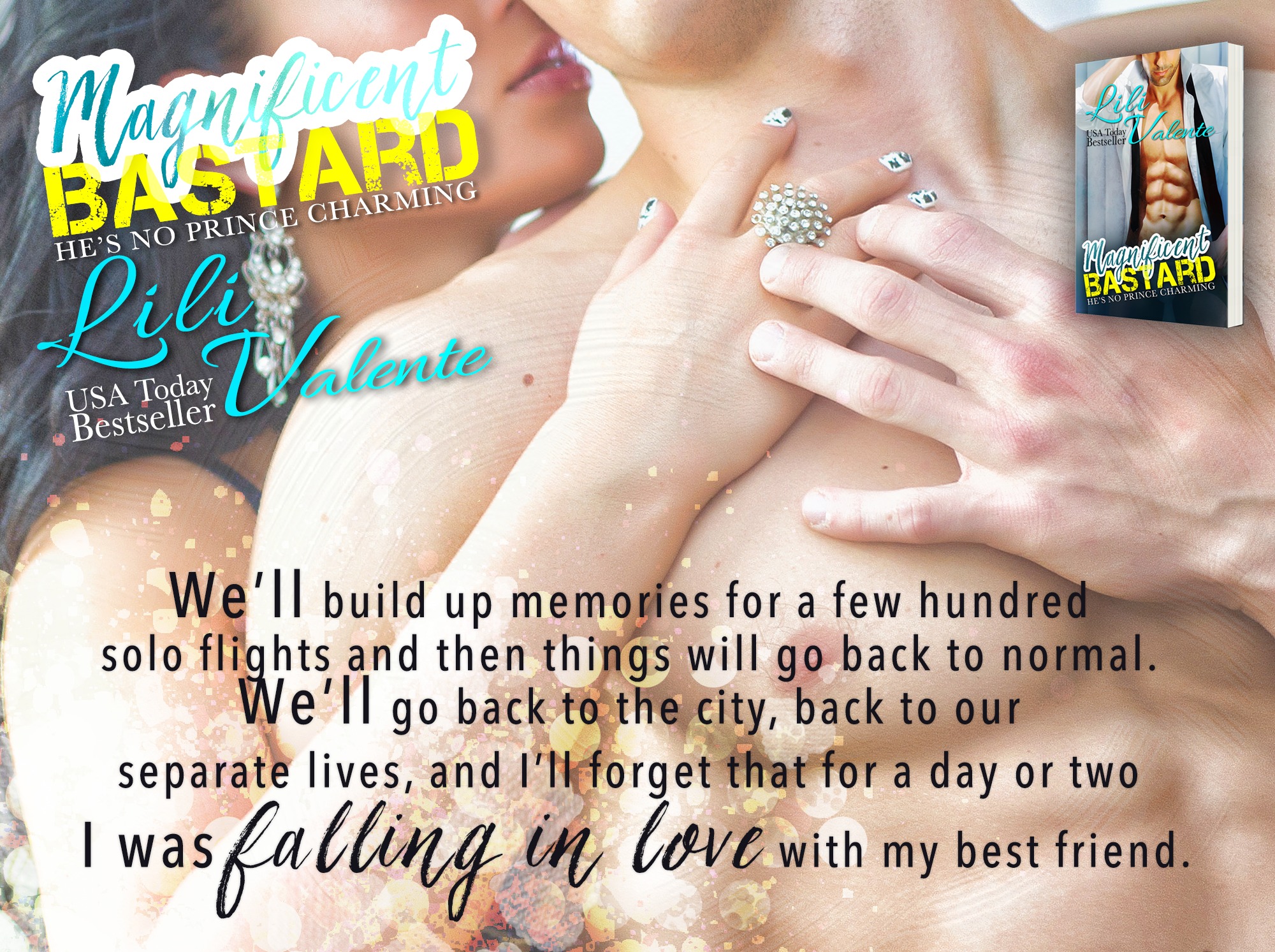 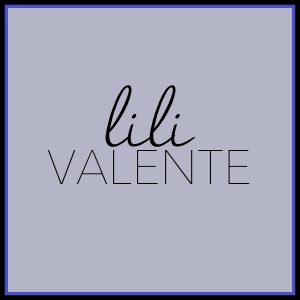 U.S.A. Today Bestselling author Lili Valente has slept under the stars in Greece, eaten dinner at midnight with French men who couldn’t be trusted to keep their mouths on their food, and walked alone through Munich’s red light district after dark and lived to tell the tale.

These days you can find her writing in a tent beside the sea, drinking coconut water and thinking delightfully dirty thoughts. Lili loves to hear from her readers. You can reach her via email at lili.valente.romance@gmail.com or like her page on Facebook https://www.facebook.com/AuthorLiliValente You can also visit her website: www.lilivalente.com 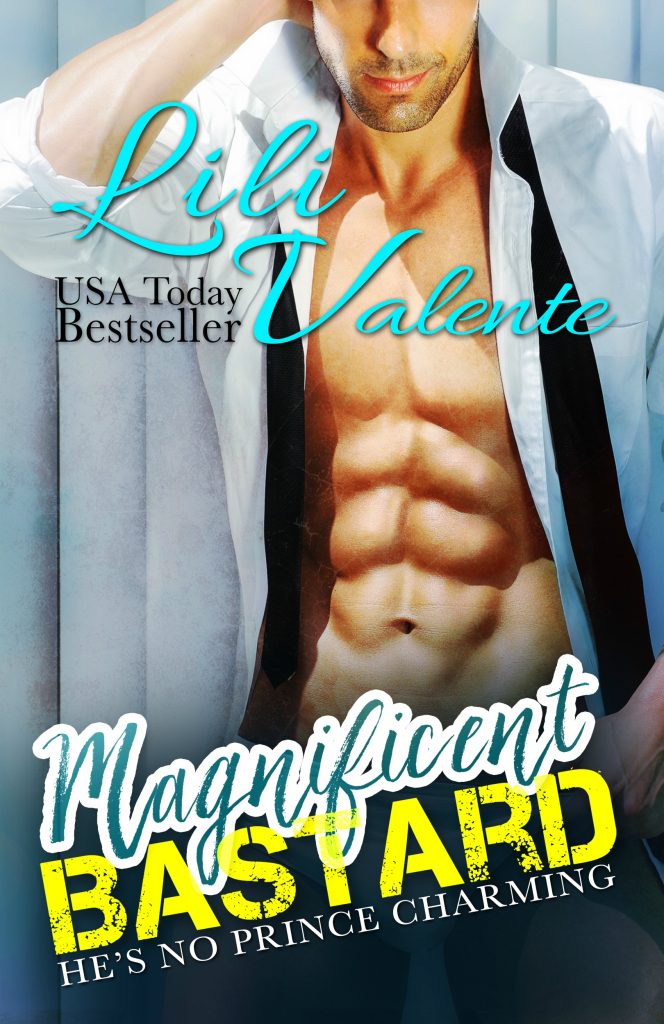