Somewhere Only We Know by Jessie Evans #newrelease #review @JessieDEvans 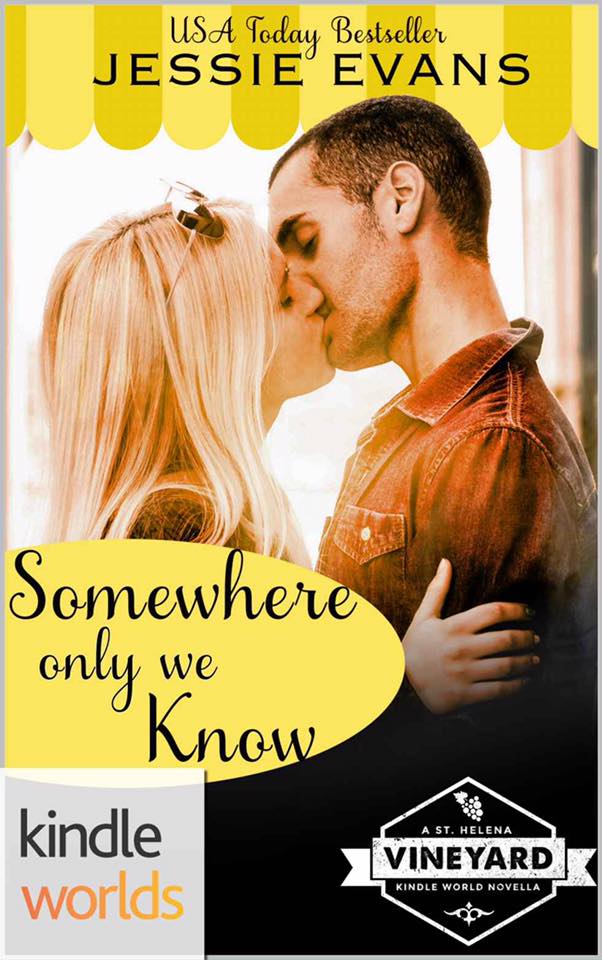 Wanted: One fresh start. Must include LOTS of wine, and maybe, just maybe, one old flame…

The last time I was in St. Helena, I made a pact with the sexiest man alive, at least as far as twenty-two year old me was concerned. If in five years Cash Donaldson and I hadn’t met our perfect matches, we would meet on April Fool’s Day and give love a second chance.

But we were young, the promise was made in the heat of the moment, and I’m perfectly okay with Cash not showing up at our secret hideout come April 1st.

Or so I tell myself…

But when I run into my old flame on my first day back in town, I’m thrilled. So thrilled that I pounce on him like a maniac and kiss him senseless first, and realize he has completely forgotten about our bargain only after I’ve made a fool of myself.

I admit it, I forgot about the deal I made with Sadie.

I could make excuses, but none of them would be valid. Because I meant every word of that promise five years ago, and now that I’m older and wiser I realize I never should have let her go.

Now that Sadie’s back in my sights, I’m not giving up on our second chance without a fight. I’ll show her that I still know how to make her smile, make her laugh, and make her melt every time we touch.

I’m in it to win the girl, but there’s a chance I’ll end up alone, wishing she were here with me in the place that only we know.

Somewhere Only We Know is another triumphantly fantastic love story from Jessie Evans.  I fell in love with Cash and Sadie from the moment she jumped into his arms, and their love for each other completely filled my heart.  The continued bantering they exchanged throughout the book was entertaining and so much fun.  As I moved through their story, I could sense the ease and comfort they shared.  It was as if they were born to find love together.  Despite the separation of five years, their hearts continued to beat for each other whether they truly realized it or not, and their souls continued to hold onto that void which could never be filled until they were finally rejoined.

I am always amazed at how quickly Ms. Evans captures my attention with her characters and stories page after page, and she has certainly done it again with Cash and Sadie.  Somewhere Only We Know is an enjoyable and quick read and a great way to spend an afternoon.

New York Times and USA Today bestselling author, Jessie Evans, gave up a career as an international woman of mystery to write the sexy, contemporary romances she loves to read.

She’s married to the man of her dreams, and together they’re raising a few adorable, mischievous children in a cottage in the jungle. She grew up in rural Arkansas, spending summers running wild, being chewed by chiggers, and now appreciates her home in a chigger-free part of the world even more.

When she’s not writing, Jessie enjoys playing her dulcimer (badly), sewing the worlds ugliest quilts to give to her friends, going for bike rides with her house full of boys, and drifting in and out on the waves, feeling thankful for sun, surf, and lovely people to share them with.