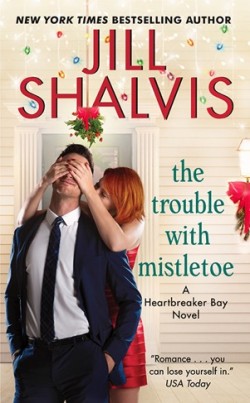 If she has her way …

Willa Davis is wrangling puppies when Keane Winters stalks into her pet shop with frustration in his chocolate-brown eyes and a pink bedazzled cat carrier in his hand. He needs a kitty sitter, stat. But the last thing Willa needs is to rescue a guy who doesn’t even remember her …

He’ll get nothing but coal in his stocking.

Saddled with his great-aunt’s Feline from Hell, Keane is desperate to leave her in someone else’s capable hands. But in spite of the fact that he’s sure he’s never seen the drop-dead-gorgeous pet shop owner before, she seems to be mad at him …

Unless he tempers “naughty” with a special kind of nice …

Willa can’t deny that Keane’s changed since high school: he’s less arrogant, for one thing—but can she trust him not to break her heart again? It’s time to throw a coin in the fountain, make a Christmas wish—and let the mistletoe do its work …

After reading The Trouble with Mistletoe I have to wonder why in the heck I haven’t read any Jill Shalvis books before! It’s not like I don’t know who she is…I follow her on Facebook, and actually own a couple of her paperbacks. But for some reason I’ve just never them, I guess I have my never ending tbr pile to thank for that-that all changes now!

I love when an author creates a world that totally captivates you and pulls you into it. And that’s exactly what Ms. Shalvis did with this book…I want to jump right in and be a part of this awesome group of friends! I want to join in on their pub nights, pizza nights with the girls, and morning muffin time at South Park. What a fun and eclectic collection of characters she’s put together.

Willa and Keane are such an engaging couple. For everything Willa had been through when she was younger, she’s come out an absolute winner- she’s kind-hearted, caring, completely loyal to her friends. She’s made quite a name for herself as the owner of South Bark, she’s respected and trusted in her community. Willa is someone you’d want by your side and in your corner!
Keane is really quite delicious! He’s stoic, completely alpha, and a tough nut to crack. He’s also charming, thoughtful, and utterly sexy.

Neither Willa nor Keane feel they are capable of any type of relationship, and that’s cause for some push and pull between them, but there’s no denying the chemistry when they cross paths! Their story is filled with so much sweetness and romance, although there’s tension and uncertainty, as they both have past baggage they need to deal with.

Overall this is a really entertaining read. It’s lighthearted, cheerful, and quite merry…it is a Christmas story afterall! It’s the best of chicklit, just a little more on the steamy side!

“You want to come upstairs, Willa?”
What she wanted was to put her hands back on his chest now that she knew it was as hard as it looked. Instead she gripped either side of her seat with white knuckles. “Of course not.”
“I think you do. I think you want something else too.”
“What I want,” she said as coolly as she could, “is dinner as promised.”
“Liar,” he chided softly.
“Well that’s just rude, calling your date a liar.”
“So it is a date.” His tone was very male and very smug. It should’ve pissed her off but instead it did something hot and erotic to her insides.
Clearly knowing it, he smiled at her and then dragged his teeth over his lower lip as he contemplated her.
Gah. She wanted to do that. And she wanted to do more too. She wanted him shockingly badly and suddenly she couldn’t remember why she shouldn’t. She tried to access her thought processes on the subject but her brain hiccupped and froze. Which surely was the only reason she let go of the death grip on her seat, slid her fingers into his hair, and . . . brushed her mouth over his.
He didn’t move, not a single muscle, but when she pulled back, his eyes had gone dark as night, piercing her with their intensity.
“Don’t read that the wrong way,” she whispered.
“Is there a wrong way to take it when a beautiful woman kisses you?”