Under the Cornerstone by Sasha Marshall #Review #5+Stars @SashaMarshall13 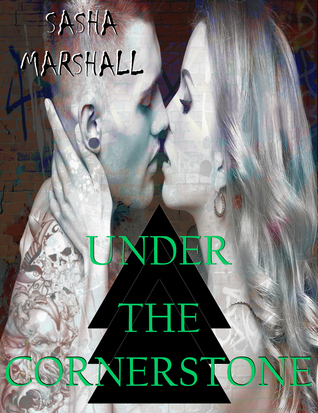 Metamorphosis… the changing of one’s self to a completely different one. Caterpillars change completely from an insect that crawls in the dirt and trees, eating its own weight in leaves. The insect with twelve-legs will then shed its skin four or five times before it wraps itself in a cocoon and digests itself. It’s a tough transformation. As the cells divide inside the cocoon, the caterpillar mutates or transforms into something beautiful… the butterfly. Once metamorphosis is complete, the butterfly emerges, only it isn’t ready to fly just yet. You see the butterfly is still wet and there’s not yet blood flowing to the wings, so even though they’ve been through a beautiful, but a painful transformation, they aren’t quite ready to fly off into the world. The butterfly sits in the cocoon and flutters its wings until it dries and the wings have enough spirit in them to spread and give it flight. And so, in all of its colorful beauty the butterfly spreads its wings and flies away into the cosmos, showing the entire world how beautiful it is. It no longer lurks on the land and in trees, eating leaves, no, now it wants nectar. It wants to divulge in the greatest and sweetest thing the world has to provide its young self.

I think the universe gave us the metamorphosis of the butterfly so humans can remember we often undergo the same process. Unluckily, some people never really undertake all the matters that are needed for a metamorphosis to truly happen. Not enough people recognize they should or want to be someone different. I realized I didn’t recognize who I was at all. Life circumstances shaped my mind and I believed I possessed a role to play for twenty-six years, but the role I played was for the people I loved. It was never for myself.

I also had to find out that nothing ever remains the same. The world is constantly evolving and so are we. We change. Sometimes the change is insidious, only sometimes it is as miraculous and considerable as the metabolism of the butterfly. This happens to our relationships with other people, and in my own story I’ve often looked back to ascertain exactly where in time one of my relationships changed. I attempted to determine when the lines blurred and feelings changed. I wanted to know, why? Sometimes we never find out the why and have to learn to embrace what our hearts tell us.

5+++++ Stars for this book but then again I don’t expect anything less from Sasha Marshall since she is THE rock romance author who writes unbelievably fantastic books that know how to bring these people in to your life. This book does come with a warning though just like a ride on a roller coaster would because that’s the emotional ride you will feel by reading Johnny and Noely’s story. Marshall writes in a way that will have you laughing your a** off one minute and then a couple pages later you have the freakin’ ugly cry happening which is astounding because she can take you to such places so fast and has you feel so completely involved with these people in this book.

Noely’s story is one of heartbreak and strength because even as a child she has a dad who walked out on her and her mom when she was eight and then mom dies when she is twelve and she is left to live with a lecherous stepfather. They say there is good and bad in everything and in this case all of this bad turned into something so good because this is when Johnny asks his dad if Noely can come live with them since she was running and hiding on the street. The bond that these two had was shown with such ardent love and caring for one another that you could see that this was the basis for everything that was to come their way. Besides Johnny and Noely within this inner circle of friendship there was also Jimmy, Rich and Ryan. These boys looked after Noely from the very start and she was always included in everything they did which in time included helping the boys get their rock band Blood Feather off the ground. She was there until she graduated college pushing and pimping these boys and their career was really beginning to take off. It wasn’t long until their first time out on the road became a reality but reality smacked Noely right in the a** because she wouldn’t be going out with them. The closeness that they all shared was something very special but it was also during this time that Johnny’s feelings for Noely took a turn. At some point his friendship had taken on a different outlook and that was something that he kept hidden because he didn’t want to scare Noely away. Noely also had feelings for Johnny but she didn’t know how to deal with things because Noely never knew who she was herself. She went on a deep soul searching adventure when the boys left on the road…she had to, things had just happened with Johnny that had put her life in even more turmoil than what she has had to deal with ever since she was a child.

Can good friendships be broken by crossing that line and if it is crossed what happens when events keep throwing another curve ball at you? This book is written from Noely’s viewpoint in the first half and if you have ever had any hardships or loss or have dealt with depression Ms. Marshall hits your heart and hits it hard. Johnny is struggling and everything goes from bad to worse from decisions he has made. You are waiting for him to man the he** up and get his sh*t together. But this is where the genius of Marshall comes in because you know how there are always two sides to every story and how you shouldn’t judge people unless you walk in their shoes, Ms. Marshall now gives you Johnny’s point of view and it made me feel so judgmental. I was passing judgment on Johnny without knowing the “whole” story. You get to see Johnny’s side now as to how things went down and that guy who I thought was a big cretin has turned into something totally different. Boy, talk about whiplash! I thought that emotionally in the first part of the book by being taken to some of the funniest stuff ever to taking your heart out and stomping the he** out of it. Now Johnny’s part comes and it makes you realize how quick you are to judge. Oh, don’t get me wrong; the boy was an a** quite often and sometimes with the help of those around him.

Again, this book was exceptional and be prepared to be taken to some of the highest highs and the lowest lows all the while getting to go on a ride with a rock band that is on their way to the big times. It seems that writing reviews on Ms. Marshall’s work is extremely hard because since I am not a writer I always feel that I’m lacking in trying to get the message across that her books are the best that’s out there. The writing is phenomenal because she knows how to take you places that leaves you exhausted by the time you are done not only emotionally but physically as well since I finished at 3 a.m. this morning. Lol I am so looking forward to more from Noely and the Blood Feather boys and if you haven’t read her Guitar Face series do yourself a favor and read them as well and I think you will understand what I am trying to say in these reviews.

This book was provided as an ARC from an honest review.