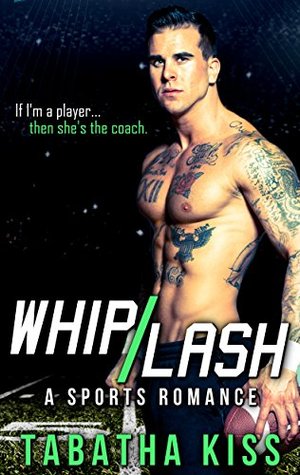 If I’m a player…
Then she’s the coach.

My dad doesn’t want me socializing with the team.
But I’ve never been much of a daddy’s girl.

Junior Morgan thinks he can flash a wink and get me in his bed.
I won’t make it so easy for him.

Sorry, quarterback. You want me?
You’re gonna have to earn it.

The new coach doesn’t want the team involved with his daughter.
But I’ve never been one to follow the rules.

Sorry, honey. I know what I want.
You have no idea who you’re playing with.

A handsome playboy. The coach’s forbidden daughter.
College football’s Most Valuable Player has met his match!

Whiplash is a steamy, stand-alone romance intended for mature readers only. It includes two free bonus novels for a limited time!

This is my first time reading a sports romance and damn it if I’m not hooked…now another genre and author to follow. Plus I found out what “incentives” to use to get someone to try their hardest. Junior Morgan was a college hotshot quarterback who had his pick of the victory hoes which didn’t make much sense because the team he played for sure didn’t win many games. Junior didn’t care and neither did his ladies because even though his team didn’t produce on the field Junior had his eyes set on the big time which he could do because he was that damn good. It was a good break for Junior and not so good a break for his coach when the coach died and in walks none other than the famous ex-NFL star Carey Pierce to take over coaching the team. Now this coach was going to get him places; namely a roster spot on an NFL team. Coach Pierce had heard of Junior and was going to make him his pet project and take this boy to the top along with getting this football program some respect. There was one rule that Coach Pierce gave to the football team and that was stay away from his daughter. How was horn dog Junior going to do that because once he laid eyes on Eliza Pierce the only thing he thought of was adding her to his long list of ladies. Was it worth risking his chance at the big time he knew Coach Pierce could take him to…hell yeah!

Eliza wasn’t a push over by any means. She wanted Junior as much as he wanted her but there was no way that Eliza was going to let Junior know that. And did that girl know how to handle the smooth talking Junior! I loved the hoops that Junior had to jump through in order to get Eliza in bed. Once they finally connected the further incentives that Eliza offered to Junior in order to further their hot sex, had him reaching farther than he even realized both on the football field and in the classroom. It’s amazing what incentives could get you to accomplish. One of the hardest part of these hookups was keeping it secret so Junior would be able to keep his football dream alive and for Ellie to stay in the good graces of her dad.

Besides sneaking around were Junior and Ellie able to keep any real feelings for each other out of this little game they had going on in the bedroom and was Junior able to resist all of his victory hoes once his team did start winning and making their way to the championship? What were some of the hang-ups that Eliza had because of her famous football father and how did they affect her feelings for Junior? As I said before I am now a sports romance follower all because of this book and this author. It was full of some pretty hot sex between these two and it had me not wanting to put it down.